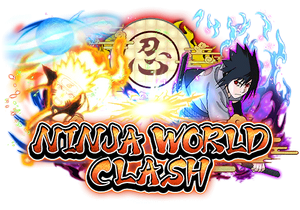 As of January 21, 2019, the Ninja World Clash has been officially closed and replaced by a new game mode known as Ninja World Ultimate Showdown.

You can use a team of up to six ninjas to participate in the Ninja World Clash. Unlike in Missions, there is no Total Cost required, meaning you can add whichever character you like.

In Ninja World Clash, the first team to deplete all three of the opposing team's hearts wins. If a team is made up of two or fewer units, then all of them must be defeated. If neither side manages to take out enough units from the opposing side within the time limit, then the team with the most remaining hearts will be the winner. If both teams have the same amount of hearts, then the team with the highest remaining health wins.

Throughout a Ninja World Clash season, players can earn Class Points by winning battles. Once you've build up enough Class Points, you will be able to take part in a Promotion Battle to advance to the next Class. If you gained enough Class Points and are currently standing at the highest Class of a Grade, then you can to take part in a Grade Promotion Battle. In both cases, if you manage to claim victory or get a draw, then you will be promoted up to the next Class or Grade depending on the battle. However, if you fail to meet within a Class's target Class Points, you will be demoted down to the previous Class. However, if your Class is 1st Dan, you won't be demoted to a lower Grade.

All units in the ninja World Clash have their own special stats in battle which are different from their usual stats in missions. These stats include:

Additionally, there is a new stat in the Ninja World Clash known as Speed. Speed influences the order a unit attacks during battle, meaning that a units with higher Speed can make their move sooner than other units.

Unlike in Missions, certain status effects in the Ninja World Clash caused from Ninjutsu and Secret Techniques are measured in seconds instead of the umber of turns. The time limit for a desired status effect only decreases when the Speed Gauge is moving and will not decrease whenever a unit is taking action.

The list of status effect that are measured in seconds are:

Various items appear in the Ninja World Clash that can be picked up by a unit in order to restore their strength or chakra, buff themselves and their allies or debuff the opposing team.

During the 2nd Anniversary, Mystery Scrolls can appear at a certain time in the middle of a battle. Picking one up can cause one of the random special effects listed below.

Retrieved from "https://naruto-blazing.fandom.com/wiki/Ninja_World_Clash?oldid=33534"
Community content is available under CC-BY-SA unless otherwise noted.