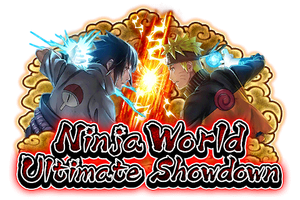 Ninja World Ultimate Showdown is a competitive game mode where players can fight each other teams in real-time combat. As of now, the Sneak Preview of the mode is currently available.

You up to six ninjas can be placed in a team to participate in battle. Unlike in Missions, there is no Total Cost required, meaning that any character can be added in a team without the penalty of bypassing the maximum cost.

The main goal in battle is to deplete all three of the opposing team's hearts. For a team that's made up of two or fewer characters, all characters must be defeated. If neither team manages to deplete all hearts of the opposing side within the turn limit, then the team with the most remaining hearts will be the winner. In the case where both teams have the same amount of hearts, then the team with the highest remaining total health wins.

Training Time is a period where players can test out their teams and formations. During this period, players will be unable to earn any Clash Points and Tier/Level placements will not be changed. Training Time sessions are available after either the Five Kage League or the Qualifier League.

The Qualifier League is the period where players battle each other to rise up in Tier rankings and earn a spot to participate in the Five Kage League. At the start of a each session, all players will begin at Tier E Level 1.

You gain Clash points by winning battles. If you lose a battle, you will neither gain nor lose Clash Points.

In order to qualify for the Five Kage League, players must obtain a certain amount of Clash Points before the participation slots are filled. Players who qualify will then be unable to participate to battle until the Qualifier League ends. Once all Five Kage League slots are filled, the remaining players who did not qualify can continue battling until the period ends.

The Five Kage League is a period where players who managed to earn a slot can battle each other in order to increase their overall ranks.

Ranks Points are still earned from winning a match, although you can now lose Rank Points when suffering a defeat.

For players who did not earn a slot in the Five Kage League, they can only battle in the Training Grounds until the current session ends.

The time in which the Five Kage League is unavailable are listed below:

Rankings for this mode are separated in Tiers. Once a certain Level has been passed within a Tier, then the player will rise to the next Tier. The current Tier and Level will determine how Clash Points they earned during the Qualifier League.

All characters in the ninja World Clash have their own special stats in battle which are different from their usual stats in missions. These stats include:

There is also another stat known as Speed, which influences the order a character attacks during battle, meaning that a character with higher Speed can make their move sooner than other characters.

Unlike in Missions, the duration of certain status effects caused from either a Ninjutsu and Secret Technique will be measured in seconds instead of the total number of turns. The time limit for a desired status effect only decreases when the Speed Gauge is moving and will not decrease whenever another character is currently taking action.

The list of status effects that are measured in seconds are:

There are a total of four different periods in one Ninja World Ultimate Showdown season: the Qualifier League, Training Time, the Five Kage League, and finally another Training Time.

Retrieved from "https://naruto-blazing.fandom.com/wiki/Ninja_World_Ultimate_Showdown?oldid=42186"
Community content is available under CC-BY-SA unless otherwise noted.